Popcorn is a traditional part of watching movies. You don’t even need to go to the cinema to indulge in a bucket because you can find ready-to-make packs in the supermarkets. Some like it plain, others enjoy it buttered, but some of us want it cheesy!

Carbs and Net Carbs in Popcorn

They say that eating popcorn has been linked to various health benefits. Despite not being considered a vegetable even though it’s made from corn, whole grains can lower the risk of heart disease, cancer, high blood pressure, type 2 diabetes, and overall mortality. But not all popcorns are made equal.

The amount of carbs in popcorn isn’t always the same. It always depends on how it is made, what the flavors are, and how you’re eating it. For instance, an entire bucket of cheese popcorn in the cinemas has a higher carb count than a bag of microwavable buttered popcorn.

For a guide, here’s some nutritional information from the USDSA for various types of plain popcorn.

Remember that net carbs are usually the units measured when on keto instead of total carbs. This is especially important for popcorn since the snack does contain some fiber. To find the net carbs, simply subtract the fiber from the total carb amount to get the net carbs amount.

Also, notice how we measured the amount of carbs in movie popcorn in terms of the tub size itself instead of cups. That’s because it’s a little trickier to calculate the carbs in movie theater popcorn compared to popcorn you make at home.

Movie theater popcorn does not regularly include nutritional information, and the brand of popcorn and additional ingredients varies between theaters.

Before finding out how many carbs there is in cheese popcorn, it’s important to learn first which type of popcorn is the most keto-friendly. According to the information we’ve shown, making air-popped popcorn will help you enjoy the cheesy treat more without getting kicked out of ketosis.

If you’re craving some cheese popcorn, here’s how much carbs each Kernel Season’s Popcorn Seasoning contains: 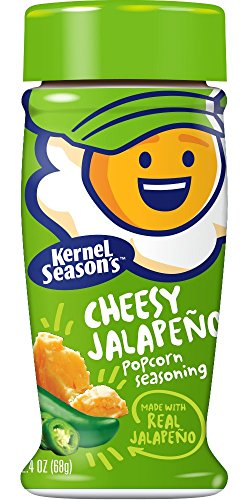 This means it’s safe to add a few teaspoons of cheese powder to your popcorn, as long as you only consume a few cups! If you want to level up your movie snack, add some grated parmesan or cheddar cheese to your popcorn.

Cheese is a great addition to popcorn that can also help you with your fat intake on keto. The salt in cheese flavoring is also a great electrolyte source, which helps reduce the symptoms of keto flu, a much-dreaded side effect of carb withdrawal.

As mentioned, air-popped popcorn has the lowest carb count compared to the others. However, if you need an alternative, we recommend you make your cheese popcorn on the stove with oil instead of in the microwave. Microwave popcorn has a packaging that has chemicals called perfluorinated compounds (PFCs) which are associated with different diseases like cancer, ulcer, hypothyroidism, and more..

These chemicals make their way into the popcorn when you heat them. When you eat the popcorn, they get into your bloodstream and can remain in your body for a long time. Exposure to this can lead to kidney and testicular cancer.

On the other hand, oil-popped popcorn can help you boost your fat intake when you add coconut oil or other non-vegetable oils. The ketogenic diet is a high-fat diet. To meet your daily fat requirements on this diet, always prepare your food with healthy fats. Butter can also make your cheese popcorn taste good!

Popcorn kernels themselves have an impressive amount of fiber, nutrients, and antioxidants, while adding cheese can help boost your electrolyte and fat intake without increasing your carb intake, unlike other sugary additives.

In short, cheese popcorn may be keto-friendly only if you’re able to eat about a cup or two. You don’t have to worry about getting kicked out of ketosis as long as you stay aware of your limit and avoid other carb sources throughout the day.

They say it’s better to be safe than sorry. So if you’re trying to be extra careful on keto, here’s a recipe for cheese pops that are so tasty and very similar to popcorn! The only difference is, they have 0 grams of carbs and 9 grams of fat per 20 gram serving!

All you have to do is cut cheddar cheese into ¼ inch squares. Then, place them on a cookie sheet lined with parchment paper and cover them with a clean towel. Leave it dry out for at least 24 hours. Yes, you do have to prepare them beforehand.

Afterward, preheat you your oven to 200C/390F and bake the cheese for 3-5 minutes until it is puffed up.

Get Cheesy on Keto!

A cup of air-popped cheese popcorn only has a few net carbs. It also has dietary fiber that makes you feel fuller and electrolytes that reduce the symptoms of keto flu. So, feel free to munch on a small amount of cheese popcorn as a treat! Just make sure to limit other high-carb foods and don’t exceed your daily carb intake.

A serving of these cheesy movie treats won’t kick you out of ketosis, but if you want to be extra careful, try the keto cheese pops recipe and enjoy munching without guilt! You can also read more about healthy snack food ideas for keto here.